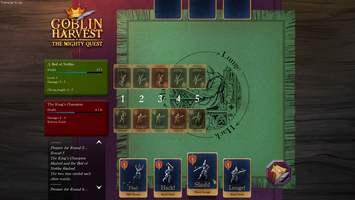 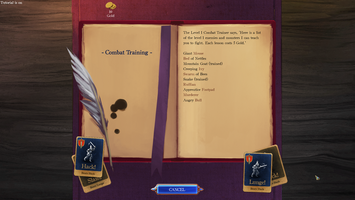 Combat is based on rock-paper-scissors.

All enemies have "combat sequences". These are the patterns of moves that a particular type of enemy will use in combat, rather than choosing random moves. For example, all Apprentice Footpads in a particular game might use a Hack-Lunge-Slash-Slash pattern.

The pattern used by a particular foe will be different for every generated game, and the length of the pattern will also vary, with higher level enemies having longer patterns. You won't know at the start of a combat where in its pattern an enemy is going to begin.

If you've previously learnt an enemy's combat sequence, you can look up the information in your Journal during a fight.

There are also cunning enemies in the game. Cunning enemies have random moves within their sequences and might also notice if you repeatedly use the same move or fight in a simple pattern.

After going through its sequence three times, an enemy will become angry and start to fight erratically, dispensing with its pattern and behaving more randomly. This means that, if you know an enemy's pattern, it's best to get the fight over quickly.

For full details, talk to any Combat Trainer in-game and she'll teach you the basics for free.

1) Pick your fights. Generally speaking, the further north you go, the tougher the enemies. Always consider an enemy's health and damage scores before getting into a scrap.
2) Arm yourself! Your two fists are not adequate for fighting most enemies. If you can't afford a weapon, search around for one. One hit with a good weapon can finish a fight very quickly.
3) Cunning enemies will notice if you make the same move 3 times or fight in a simple 3-move pattern, and you can use this to your advantage. Let's say you hack-hack-hack. The enemy will notice this and there's a 50% chance it will lunge next turn (dispensing with its pattern for that round) because lunge beats hack.
4) After going through their pattern 3 times, all enemies start to fight randomly. At this point, all enemies become cunning, and the chance of them responding to patterns in your moves is now 75%.
5) If you're doing badly, FLEE! There's a 50/50 chance of success. You'll get an Old Wounds card but that's probably better than ending up back at the Citadel, lighter in gold and with half your stuff missing. Note that if your Health bar is red it means you could be defeated by the next blow the enemy lands on you.
6) Get a shield to reduce the damage you suffer when you're hit.

Get Goblin Harvest - The Mighty Quest

A Strategy RPG set in a fantasy kingdom